You obviously couldn't have asked for anything more. Two Hindi movie releases of Rahman within a week is too good. Both Ada and JTYJN (Jaane Tu Yeh Jaane Na) are real gems. Currently relishing this moment. Will come back soon with music reviews of both the albums, so keep looking out for this place.

Like any other average Indian guy I am also a great cricket fan, and the current ongoing IPL tournament has meant lots of entertainment for all. Though I have been following cricket matches for more than 15 years for now, but had never got an opportunity to watch a match live from a stadium.

Finally managed to get hold of the cheapest tickets available for the critical Delhi Daredevils vs. Mumbai Indians (though not that cheap priced at 500 Rs.) match which would definitely decide the fate of the two teams for a semi-final berth.

The match was supposed to start at 2000 hours and the gates were supposed to open at 1800 hours. I had planned to reach the stadium at around 1800 hours to avoid the maddening crowd which was expected in a stadium with a capacity of around 40,000 but come on being in Delhi I knew we would be expecting a few more audiences as usual :-) . Somehow got late due to some traffic restrictions at CP and after parking the vehicle at Ramlila ground (around 0.7 kms from the stadium) reached the stadium gates at around 1900 hours, i still thought well in time for the match which was scheduled to start an hour later. But as usual I was proven wrong, getting inside the stadium was probably more difficult that clearing the IIT JEE entrance exams (pun intended). Though I didn't clear the IIT JEE entrance in an hour I came victorious and managed to get entry into the stadium in around an hour at around :-) all soaked in sweat. Finally entered the third floor stands and took a seat on the third floor and got a seat in the fifth row from the back. But as soon as took the seat along with my wife the view was definitely breathtaking and all the pains and below which we had to take to get the venue finally looked worthy. The stadium among the flood lits was shining with glory . 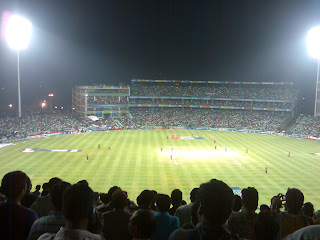 By the time we were settled in the seat Tendulkar and y had come to bat, and Jaysurya was in his golden touch smashing 66 runs off just 42 balls. But as expected Tendulkar got the biggest cheer while we was bating though he could just manage 18 off 16 balls before getting out to a beauty from Mahesh. In addition a good stint by Uthappa in the middle order helped Mumbai to reach a respectable total of 177 off the alloted 20 overs.

After a small break Sehwag and Gambhir came out to bat. Sehwag after hitting four great boundaries (18 of 6 balls) got clean bowled by Nehra as has been captured in the unclear video below captured on the cellphone.

In the coming overs Tiwari, Dhawan and Mahroof stabilized the innings but the icing on the cake was the exhilarating 56 of 32 balls from Karthik which took Delhi to victory with one ball to spare and 5 wickets in hands. The below video captured the last two balls played by the Delhi Daredevils team emerging victorious and coming a step closer to the semi-final slot. 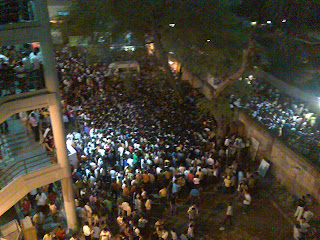 So finally managed to reach home at around 1 early in the morning, after a quick bite at Mc. Donalds (yes finally Delhi is matured enough to keep restaurants open till 1 in the morning). Sure it was a great experience, but the poor administration and management (esp. during entry/exit) from the stadium really left a bad taste in the mouth and above that is a real risky experience. It's high time the authorities wake up in time.
Posted by Vikram at 12:15 PM 1 comment:

From the stable of "Marvel" comics after the stupendous success of Spiderman movies comes another superhero Movie "IronMan". Before stepping into the theatre i had no idea about the superhero nor had heard much about the movie, but despite that planned to take the step forward as that was the only thing which was giving me respite from the scorching Goa heat in May.

IronMan is a story about a rich genius entrepreneur Tony Stark (played by Robert Downey Jr.) in the business of building ammunitions. One fine day he is kept captive in an Afghan cave to create a weapon for the rebels out there. He builds an iron suit to escape from there and improves on the design to build a superhero out of the same called "Iron Man" to fight against evil. By the end of the movie he is also awakened about the ill-effects of the manufacturing arms and how they could easily go into wrong hands.

Now what works for the movie is the way Tony Stark has played his role. His character has been very well built and the special effects in the movie are also worth mentioning. In addition the movie is also well supported by various other characters in the movie like Terrence Howard, Gwyneth Paltrow.

To summarize a nice movie to enjoy this summer and hopefully you would not come out disappointed from the theatre.

Off to Goa for a week long vacation. Will post a complete travelogue once i am back. Hope you all have a great time out here. See ya..
Posted by Vikram at 1:33 PM 1 comment: