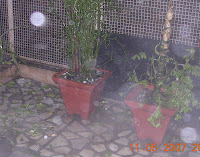 A few years back if anybody would have had even suggested about a hailstorm in the scorching heat of May, all of us would have probably passed it off as another joke. But this joke was turned into a reality on the evening of 11th May 2007, when a hailstorm hit Delhi in May for the first time as far as I may recall.

Call it as an impact of global warming, or whatever id sure did have some big impact on bringing down the temperature in Delhi, but I guess along with it also came a huge loss to the farmers who probably slog for months to see their crops ripe. In addition India still being far from beliving in the concept of insuring their crops, the whole burden would have to be borne by the farmers.

So is there any way we may help the situation ? The least we could do is to ensure we conserver what we know for sure is not gonna last for long, and also help the environment (which includes and is not limited to power, electricity, petroleum water etc.)

So lets join the world together and make the world a better place to live.. :-)
Posted by Vikram at 8:49 PM No comments: